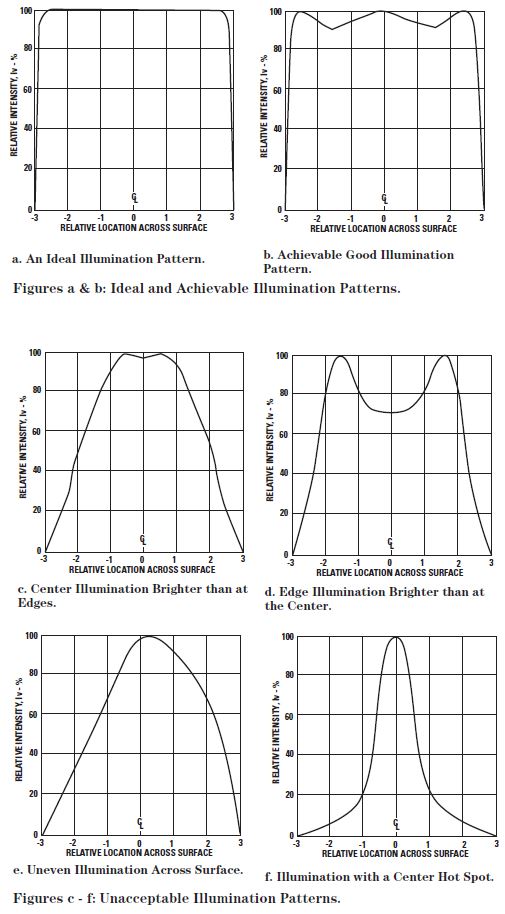 These same concepts may be
applied to making small sized
annunciators utilizing the light
pipes described in the following
section. In many cases, silkscreening
an opaque background,
leaving open letters or a symbol, is
most effective. The silk-screened
diffusing film is glued to the exit
surface of the light pipe with an
optically clear adhesive to form the
annunciator module. In the “off”
condition, the letters or symbol are
dark and without color and tend to
blend with the background. In the
“on” condition, the bright letters or
symbol, with the color of the LED
light, stand out vividly contrasting
in appearance against the
background.

Light guides for front panel
indication are typically called “light
pipes.” Light pipes can be made in
many simple and compound
shapes. Simple cylindrical,
rectangular, and triangular shaped
light pipes are illustrated in Figure
25, utilizing an SMT LED as the
light source. These simple light
pipes can be made from
commercially available plastic rod.

Custom shapes, usually precision
molded, are designed to achieve
special effects, as illustrated in
Figure 26. Two or more LED light
sources may be needed to
illuminate a large arrow shaped
light pipe. A “three legged” light
pipe may be used to give a three
condition status in a single
indicator, red for “danger”, yellow
for “caution”, and green for “safe”.

Compound light pipe
configurations may also be
precision molded for specialized
applications. The serpentine light
pipe, shown in Figure 27, is
designed to move light around an
obstruction. The light ray
reflections follow the curvature of
the light pipe without loss. 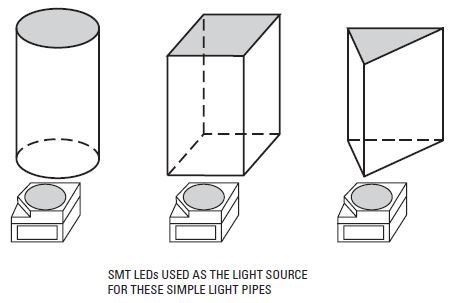 Figure 25. Simple Light Pipe Shapes for Use as Front Panel Indicators Using an SMT LED as the Light Source. 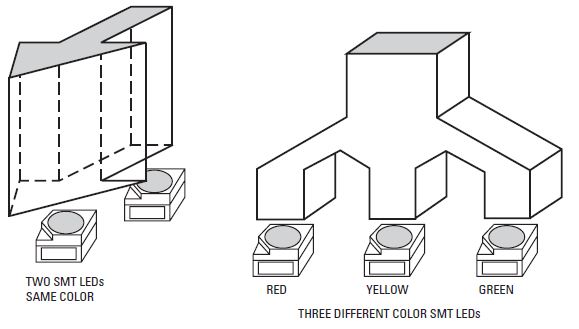 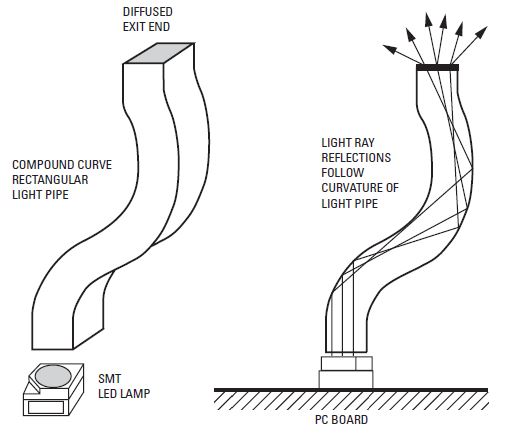 Figure 27. A Serpentine, Rectangular Light Pipe Designed to Move Light Around an Obstruction.

thick tie plate is flexible,
permitting manual adjustment of
each light pipe as the array is
installed in the next assembly. The
2.54 mm (0.100 in.) thick tie bar in
Figure 28b is rigid, holding the four
serpentine bar elements in precise
position to assure accurate
placement into the next assembly.
Since the thin tie plate and rigid tie
bar are perpendicular to the light
pipes, cross coupling of scattered
light from an illuminated light pipe
element is minimal, and will not
illuminate adjacent light pipe
elements.

Figure 28a. A Four Element Light Pipe Linear Array, Molded as a Single Piece Part with a Flexible Tie Plate. 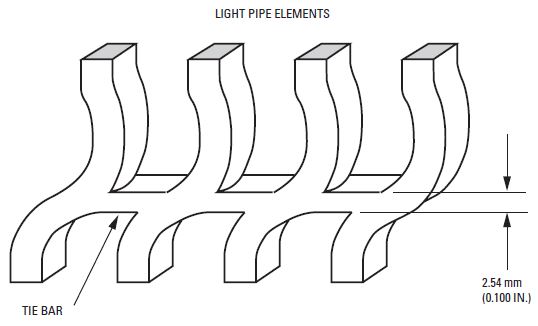 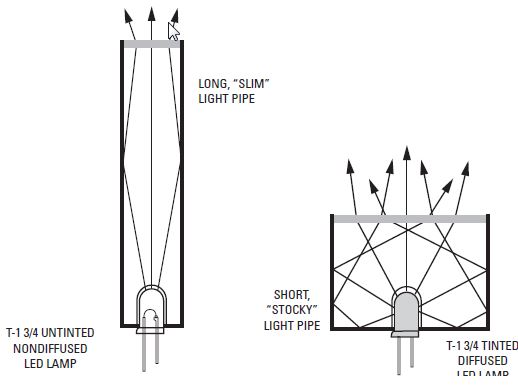 Figure 30a, the individual light pipe
elements are short in length, are
either solid or hollow inside, and
vary in size and shape. The SMT
LED lamps fit up against the bases
of solid light pipe elements, or fit
inside hollow light pipe elements,
as illustrated in Figure 30b. The
light pipe array is placed over an
SMT LED lamp pc board assembly
to form a backlighting unit, as
illustrated in Figure 30b. A bright,
wide angle illumination pattern is
achieved at the exit end of each
light pipe element. A pc board
assembly with standard T-1 3/4 or T-
1 LED lamps may also be used,
with the lamps fitting inside the
hollow elements of the flexible
light pipe array. The backlighting
unit is then mated with the keypad
and front cover to form the
illuminated front panel assembly.
The push button caps in the
keypad are molded from untinted,
nondiffused acrylic or
polycarbonate. The indicator
windows in the front cover are
untinted and usually nondiffused.
Both the key caps and windows
may be diffused if desired. The
wide illumination pattern from
each diffused light pipe element
assures an even illumination and
wide viewing angle for each push
button cap and front panel
indicator window. In some panel
designs, the indicator windows are
cut-outs in the front panel cover,
allowing solid light pipe elements
to protrude about 2.54 mm (0.100
in.). This makes a pleasing design,
adding some depth to a front panel
configuration. 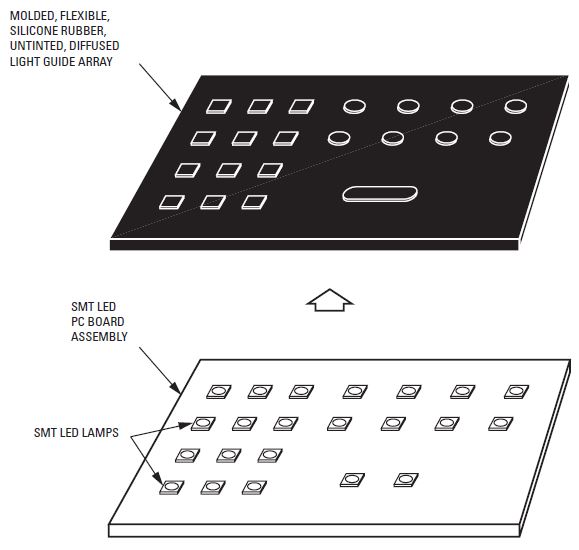 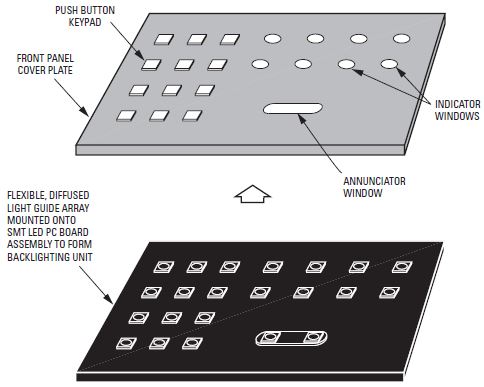 The light output radiation pattern
from the exit end of a light pipe
should be designed to meet the
luminance and viewing angle
requirements in a defined ambient
lighting environment. A trade-off is
made between on-axis intensity
and radiation pattern, as illustrated
in Figure 31. A wide radiation
pattern, at the expense of on axis
intensity, Iv (0), is better for a wide
off-axis viewing angle. This is
suitable for most applications in
moderate ambient lighting
conditions less than 1000 fc. For
bright ambient light conditions,
such as for outdoor viewing,
radiation pattern is reduced to
achieve a high on-axis intensity.

A designer may measure the light
output radiation pattern from the
exit end of a light pipe using a
goniometer. The goniometer
rotating detector should be at a
nominal distance of 305 mm (12
in.) from the exit end of the light
guide. Radiation pattern (viewing
angle) curves are obtained, similar
to those shown in Figure 32. 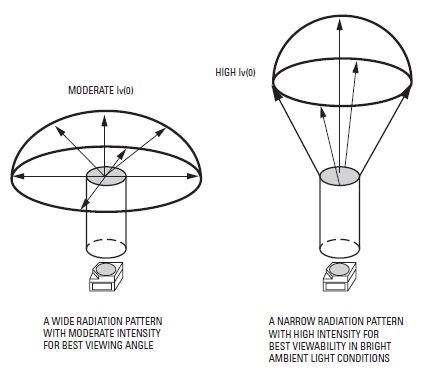 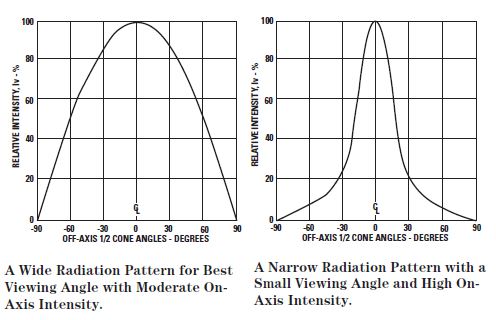 A flat transparent plate with
engraved or etched grid lines on
the face surface may be edge
lighted with LED lamps, as shown
in Figure 33a. The face surfaces of
a transparent flat plate are smooth
for an observer to see through. The
surfaces of the grid lines are rough
to give the necessary diffusing
surface. The grid lines may be
coated with a thin layer of white
translucent paint to enhance
daylight readability, with some loss
in grid illumination. All four edges
of the light plate may be painted
with white reflecting paint.

Light within the light plate is
internally reflected by all surfaces,
and escapes only through the
diffused lines providing the grid
line illumination, as shown in
Figure 33b. Holes are drilled into
two opposite ends to accept the
domes of HLMP-650X subminiature
lamps. The LED lamps are epoxied
to the transparent plate and
electrically wired in series. The
rectangular bases of the LED
lamps are not inserted into the
light plate in order to keep the
plate thickness at 2.54 mm (0.100
in.). The number of LED lamps
required, spaced on approximately
1/4 to 1/2 inch centers, is determined
by the size of the light plate and
the desired luminance of the grid
lines. 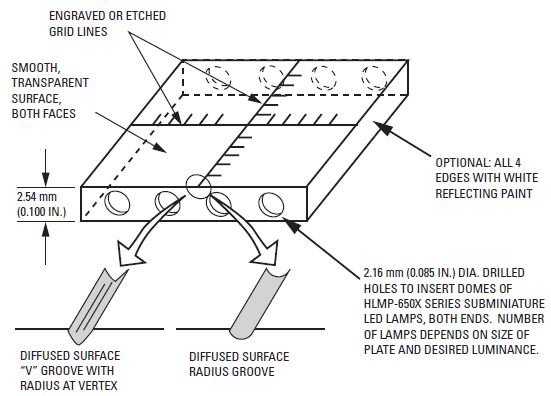 Figure 33a. A Transparent Flat Plate with Engraved or Etched Grid Lines Illuminated by Subminiature LED Lamps, Epoxied to the Plate. 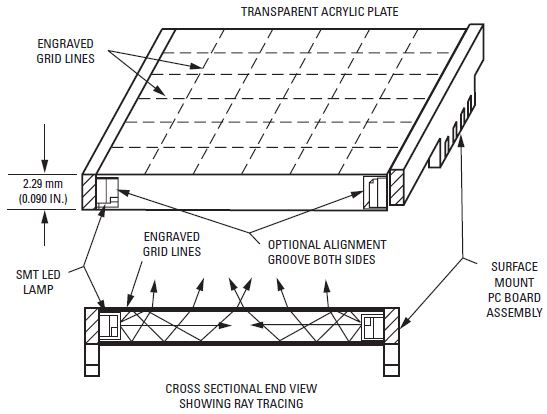 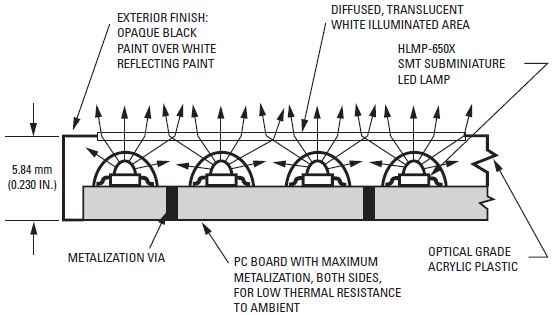 to ambient. The LED lamps are distributed throughout the panel to achieve a desired lighting effect. Flux coupling into the panel is 100%. Light rays from the LED lamps blend together within the panel to produce even illumination through the illuminated areas on the face of the panel.

These illuminated areas are diffused and coated with a thin layer of translucent white paint. In daylight, the LED lamps are off, and the illumination areas appear white by reflecting ambient light. At night, these areas are internally illuminated by the LED lamps and appear the same color as the LEDlight.

All exterior surfaces of the panel are painted with a white reflecting paint, leaving open the areas on the face of the panel to be internally illuminated. An overcoat of black, scratch resistant paint is added to form the exterior finish. The overall thickness of the panel is 5.84 mm (0.230 in.).

Coupling an Optical Fiber to an LED Lamp

The most effective method to couple an optical fiber to an LED lamp is to insert the fiber into the lamp package in close proximity to the LED chip. This assures the

most efficient flux coupling and
light capture by the optical fiber,
although only a small portion of
the LED emitted flux is actually
captured by the fiber. The
procedure is illustrated in Figure
36a.

1. With a jeweler’s lathe, cut off the top
of the dome package to obtain a flat,
semi-smooth surface.
2. Looking through the flat surface with
a microscope, visually locate one

corner of the LED chip opposite the
wire bond, as shown in Figure 36b.
3. Precision drill an insertion hole down
to the located corner, stopping at a
minimum distance of 0.5 mm (0.020
in.) above the LED chip. Do not come
in contact with the wire bond or LED
chip.
4. With a syringe, insert a clear, room
temperature curing epoxy into the
hole.
5. Immediately insert the optical fiber

into the hole with a steady rotary
motion to assure no air bubbles.
6. Let the epoxy cure for the required
length of time.
The optical fiber is now anchored
to the LED lamp package. The flux
emanating from the corner of the
LED chip is captured by the
entrance end of the optical fiber
with minimal loss.

Figure 36a. Technique for Coupling an Optical Fiber to an LED Lamp 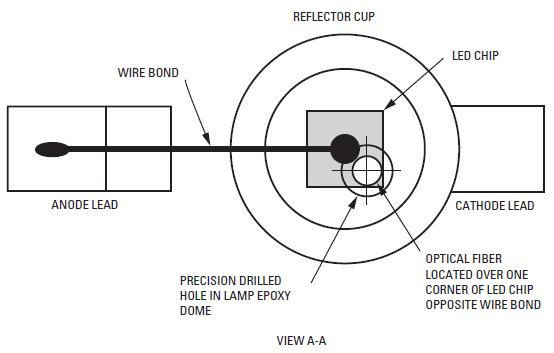 Figure 36b. Positioning of Optical Fiber With Respect to the LED Chip.

List of LED Lamps, Untinted, Nondiffused, Recommended for use in Light Guide Applications